We are not usually aware of everything that surrounds us in our reality and all the number of decisions that our bodies must make in fractions of a second. Or, how our nervous system works and keeps our body connected to the world, how it analyses all the stimuli which we receive and also how it manages precise and concrete actions. 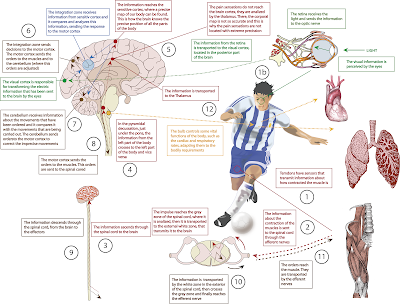 Let’s imagine this situation. A football match, twenty four seconds into the fifty third minute. (52:24)
The score: nil, nil.
The centre forward crosses the middle of the pitch towards the opponents' penalty box. A lot of information arrives in his brain, from his sensory system: his skin sends information about the atmospheric temperature and even about the slight breeze that blows around him; his ears are perceiving the shouts of the crowd and his team mates; he can even notice the smell of the mown grass and humidity of the air wetting the inner surface of his nose.
But only the autonomous part of his brain is reacting to these stimuli, producing sweat, making his body hair stand up on end. The conscious part of his brain, however, is unaware of all this information due to a general phenomena called lateral inhibition. His brain is totally concentrated on things that are supposed really important: the ball, the goal, the goalkeeper and his position.
The centre forward looks at the ball. The light from the sun impacts against the ball, the grass and the goalkeeper, and all this matter reflects the light, that crosses the air and is arrived at the eyes of our player. It moves through the cornea, then goes the iris and the lens that focuses it on the retina. There, the visual information is transformed into an electric impulse that exits the eye via the optic nerve. (1b)

The optic nerves exit the eyes and are connected to the brain. Before reaching the brain, they cross from left to right and from right to left respectively. So the right eye sends the information to the left cerebral hemisphere and vice versa.
The visual information crosses all the brain, reaching the optic chiasm, and then it is transported to the posterior part of the brain also called occipital region, where the visual cortex can be found. In this region the electric information sent by the eyes is interpreted and transformed into images.
So the centre forward sees the goal, the goalkeeper and focuses his attention on the ball in order to shoot and make the ball fly into the top right corner of the net.
When he looks at the ball, he decides which part of it he must address and how.
His brain is receiving information about his corporal position, how contracted his muscles are, where his leg, knee and ankle are in relation to the rest of the body. (1)
The tendons send information about how contracted they are. These signals are sent through neves that exit the muscles and end up in the spinal cord. They are called afferent nerves. (2).
The afferent nerves arrive at the spinal cord. In the spinal cord there are two regions. One of them, the internal region, is butterfly shaped and a dark grey colour. It is made up of neuronal bodies. We can find a multitude of neurones connected to one another. This is the integration region, where some simple decision can be made.
If this region perceives that any kind of severe damage could occur, it would send the information to the muscles in order to prevent it, without the intervention of the brain. This process is called spinal or arc reflex. One typical arc reflex takes place when we touch a very hot object and we move our hand away without intention, or when the doctor hits our patellar tendon with a small hammer and our leg automatically extends
In this case it is not a spinal reflex, but the information must be sent to the brain. It is transported by the nerve tracts that ascend and descend through the white external region of the spinal cord. (3)
The information about the muscular state of contraction ascends through the medullar white matter to the brain. First, it crosses the medulla of the brain stem, reaching the pons. Just like in the eyes, in the medulla of the brain stem the information from the left part of the body crosses to the right part of the brain, and the information from the right part of the body crosses to the left. This medullar region is called pyramidal decussation (4).
The information ascends from the pons to the thalamus. And the thalamus sends the information to the cerebral cortex, that is mainly made up of neuronal cell bodies with a lot of connections, forming the grey matter. A part of the cerebral cortex is organised as a precise map of the body. This is a sort of scheme, essential to determine the position of the different parts of our body and the location of the sensation from our skin. This region is called sensitive cortex (5). 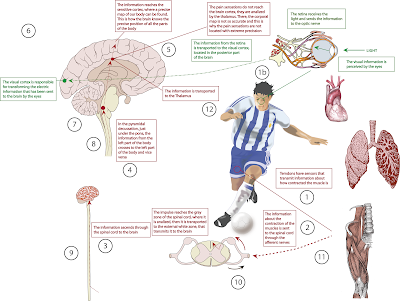 The pain sensations do not reach the cerebral cortex, but they are mainly analysed by the thalamus. The corporal map in the thalamus is not so precise. Due to this, the pain sensations are not located with extreme precision. In fact, the damage caused to his foot when our footballer was kicked ten minutes ago is not hurting exactly at the point of impact, but all his ankle is still painful.
The integration zones are responsible for deciding which actions must be carried out. These regions receive information from the sensory cortex, in order to know the bodily position and from the visual cortex, in order to decide the direction of the movements the leg must undertake to strike the ball in the exact place
The integration zones compare all this information with the memory and the experience. And decide which kind of movement is the most apt in this situation, depending on the position of the ball, the goalkeeper and the location of the goal. (6)
Once the movements have been decided, the integration zones send the signal to the motor cortex, about what the footballer wants to do. The motor cortex is responsible for ordering the movement to the muscles. This region, just like the sensitive cortex, has a precise map of the body, with all the muscles. So the brain can transmit accurate instructions to concrete muscles, about what they have to do, how they must contract and the movement they have to perform. 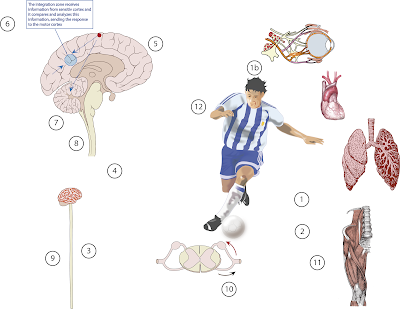 There is an additional system to make the movements even more precise.The integration zones send the information not only to the motor cortex, but also tho the cerebellum, a part of the brain located in the posterior region, covered by the occipital bone. The cerebellum receives information not only from the motor cortex, but also from the sensitive cortex. So the cerebellum knows what orders have been sent and what actions are being carried out and it can correct the movements when it detects that they are inaccurate. It sends orders to the motor cortex to correct the imprecise movements (so it does not transmit information directly to the muscles, but to the motor cortex). (7)
Summing up, our footballer’s cerebellum is receiving information about what his legs must do and what they are really doing. If any imprecision is detected, if the muscular movement is not exactly the required one, the cerebellum sends informations to the motor cortex in order to correct it and adjust it to the orders decided upon by the integration zones.
The more accurate the cerebellum is, the more accurate the movement. This is reason why the movements are more precise when they are done slowly: the cerebellum has more time to carry out its function, so the orders are much more well-defined.
The cerebellum also aids in keeping the balance, sending information to the motor cortex to position the arms and the trunk in the best way to maintain a balanced position.
Our striker has shot at goal many times in his career, he has trained these movements throughout his playing days, so the processes have become firmly established by his brain and the integration zones. This is why the movements are so coordinated, despite the speed they are being carried out at.
The orders of muscular contraction are sent by the motor cortex. This information is transmitted to the spinal cord. Before reaching the spinal cord, it crosses from the left part of the brain to the right part of the medulla and vice versa in the pyramidal decussation. It descends through the spinal cord by the peripheral white cords, reaching the efferent nerve that transmits the impulse to the muscle that must move. (9).
In our case, the efferent nerve exits the medulla and reaches the leg muscles. There, the final motoneurons stimulate the muscular contractions, causing the movement o the limb (10)
Then the right leg’s quadriceps femoris contracts and the knee joint extends, while the upper part of the leg moves forward impulsed by the contraction of the the pectineus, psoas and abdominal muscles. The leg moves from back to front, the tibial muscles put the foot in an optimal position, so it impacts on the ball. (11) 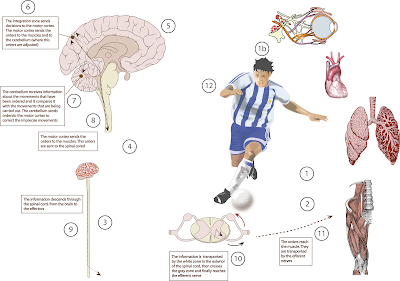 Twenty five seconds into the fifty third minute. (52:25)
After the impact, the mechanical energy is transmitted from the leg to the ball. Then the ball flies, moving with an accelerated movement.
The footballer’s heart beats at two hundred beats per minute, his lungs take in air, breathing deeply about twenty times per minute. His muscles obtain energy burning glucose, so they need large amounts of oxygen.
The cardiac and respiratory rates are controlled by a the bulb, in the brain stem, just above the spinal cord. This region adjusts these rates to the bodily requirements. This part of the brain is absolutely essential and any kind of damage is simply lethal. (12) 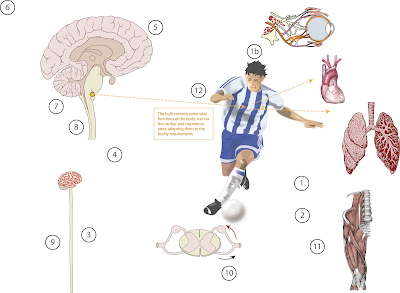 After the effort, his body relaxes, everything is calmed now, while the ball moves in a slightly curved way, passing between the the goalkeeper’s hand and the crossbar, reaching the net, that stops it and making it fall, slowly, to the ground.
Twenty seven seconds into the fifty third minute. (52:27)