Components of the Geosphere 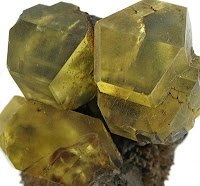 We define geosphere as the solid part of the planet. Nearly the whole solid components of the planet are minerals or rocks. Although there are some exceptions, such as the soil or the living beings, that are solid substances but are not minerals or rocks. The organic elements related to living things are a part of the Earth’s component called Biosphere.
Minerals and rocks are very important for human beings, not only because they are the main component of the planet, but also because they are the main source for raw materials. Lots of materials, such as the concrete used to build our house, the iron used to make a knife or the silicon used to make a computer come from different minerals or rocks.
Minerals
Definition
Minerals are solid, inorganic, naturally occurring but abiogenic, crystalline substances. They have to be homogeneous and have a representative, constant and fixed chemical composition.
The properties of minerals are inherent to this definition. As a result, all minerals have to satisfy all the criteria of the definition, and no substance can be named a mineral if it does not satisfy any point of the definition.
Let's analyse all the items of the definition.
Characteristics
Minerals can be classified according to different characteristics. These characteristics can be divided into two groups: chemical and physical characteristics.
Chemical composition
The chemical composition of a mineral is related to the chemical components of the mineral and the formulation. Minerals have, by definition, a definite chemical composition. They are always inorganic substances, and usually have a simple formula.
Two minerals can be different and have the same chemical composition. Diamond and graphite, for instance, have the composition: carbon. The final properties of a mineral depend not on their chemical composition, but also on other characteristics, such as the crystalline structure.
Some minerals can also have impurities. Impurities are little amounts of elements or chemical components that are not a part of the regular formula. Impurities can change some properties of the mineral, such as its colour or brightness.
Mineral can be classified according to their chemical composition. There are two big groups, named silicates and non-silicates.
Silicates are minerals with silicon (Si) in their composition. Silicon is, apart from oxygen the most abundant chemical element of the Earth's crust. Due to this, silicates are very abundant and there are many types of silicates. Quartz, muscovite, biotite or olivine are some examples.
Non-silicates are minerals without silicon in their formula. There are seven groups of non-silicate minerals.


Crystallisation
The crystallisation is the tridimensional distribution of the atoms. The atoms of the minerals are arranged in extremely ordered microscopic structures. The repeated geometric figures that the atoms form and their axis and mirror planes define crystalline structure of the mineral.
According to these geometric characteristics there are seven different crystalline groups: monoclinic, triclinic, orthorhombic, tetragonal, trigonal, hexagonal and cubic.
The crystalline structure is extremely important. Two minerals with the same chemical composition can have different properties because of their crystalline structure. Diamond and graphite, for instance, have the same chemical composition: carbon (they are native minerals). Their properties are, however, different: diamond is the hardest mineral, graphite is so soft that it can be scratched with our fingernail. The main difference between these two minerals is their crystalline structure: diamond
Colour
The colour of a mineral depends on how it the absorbs or reflects light. Some minerals have only one colour, so we it can be said that the colour is characteristic for that mineral. Most of them, however, can have different colours.
This variability depends on several factors, such as the origin and formation of the mineral (temperature and pressure during the formation of the mineral) or the presence of impurities. We have studied that impurities are chemical components that contaminate the mineral, but are not a part of its regular composition. Some of these chemical components can cause changes in colour even in very low quantities.
Brightness and lustre
These characteristics refer to the quality and quantity of light reflected by the minerals. Minerals can be classified according to their brightness. The most typical types of brightness or lustre are:

Shape and cleavage
Cleavage is the tendency of a mineral to split along definite planes. The shape of the mineral depends on these planes and how the mineral split.
The planes and the shape are related to how the atoms of the mineral are ordered. According to their shape, we can classify minerals as basal, cubic, octahedral, prismatic, dodecahedral or rhombohedral.
Hardness
Hardness is defined as the resistance of a mineral to scratching. The reference to measure the hardness of a mineral is a group or list of ten minerals called Mohs scale of mineral hardness.