Rocks are naturally occurring solid aggregation of one or more minerals. They are inorganic substances (although there are some exceptions, such as rocks derived from living beings,  like coal and petrol) not made by humans.
According to this definition, a rock is composed of mineral grains. A rock always has the same mineral composition, but the proportion of these minerals can change. Due to this, rocks are not homogeneous and don't have a fixed chemical composition.
Classification
Rocks can be classified according to their composition or their origin.
According to their composition, rocks can be:
According  to their origin, rocks can be:
Igneous Rocks
Igneous rocks are formed through the cooling and solidification of a magma or lava. Magma and lava are both rocks in liquid or semisolid state, but there are some differences between them. Magma is a mixture of molten rocks beneath the Earth surface. Lava is a mixture of molten rocks expelled by a volcano.
There are two different types of igneous rocks, according to where they are formed: intrusive and extrusive igneous rocks.
Intrusive rocks, also called plutonic rocks, are igneous rocks formed from a magma that solidifies in deep parts of the Earth. Due to the depth, the magma solidifies slowly. As a result, the minerals formed are made up of large crystals. Their mineral grains can usually be identified with the naked eye.
Granite is a typical plutonic rock. 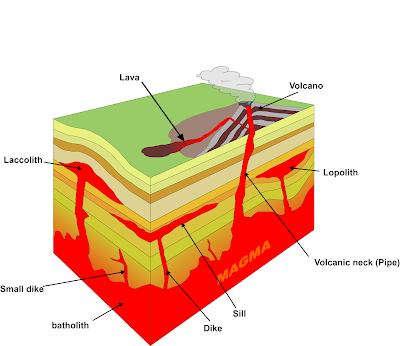 Extrusive rocks, also called volcanic rocks, are igneous rocks formed form a magma that solidifies at the Earth surface. The magma cools very quickly. As a result, the minerals formed are made up of small crystals. Due to this, their mineral grains can't be identifies with the naked eye.
Pumice is a typical volcanic rock.

Metamorphic Rocks
Metamorphic rocks are formed due to the effect of high pressure and temperature. The pressure and temperature lead to chemical and physical changes of the rock, although all these processes must occur always in a solid state, without melting (if the rock changes its state and become liquid, the rock formed would be an igneous rock).
The physical and chemical processes change the mineral composition of the rocks. As a result, some minerals are transformed into others.
These extreme conditions can be found on deep zones of the crust or near a big masses of magma. Gneiss or marble are two examples of metamorphic.
There are three types of metamorphic processes according to the conditions of formation: contact, dynamic and regional metamorphism.
Contact metamorphism: this process takes place due to the increase in temperature of a rock when it comes into contact with a large mass of magma.
Dynamic metamorphism: this process takes place when the friction in fault zones increases the pressure and temperature, resulting in metamorphism.
Regional metamorphism: this process is related to huge geological phenomena that cover  large areas, such as mountain ranges or convergent tectonic plates. This metamorphism is typical in boundaries between different tectonic plates.

Sedimentary Rocks
These rocks are formed by accumulation and compaction of fragments of other rocks that have been eroded. These fragments are called sediments.
The first phase of the sedimentation is carried out by two processes called weathering and erosion.
Several agents break down the rock into small particles. This processes are called weathering and meteorization. The small pieces of rocks can move from one place to another. The weathering added to the movement of the rock fragments is called erosion.
The natural agents that break down the rocks can be classified into three groups: atmospheric agents, water and living beings.
The most important atmospheric agents are wind, rain, snow, hail and changes of temperature. The water courses, rivers, streams, glaciers (courses of solid water, made of ice) or the waves of the sea are very relevant erosive agents. Living beings can also erode the rocks. The roots of many plants, for instance, that grow in rock fissures can break the rocks, or many microorganisms that transform the rocks due to chemical reactions.
All these processes that transform the rocks into tiny particles are called fragmentation. These particles can be transported, completing the erosive process.
The transportation of particles can be carried out by different natural agents, such as the wind, streams or rivers. The fragments of rock move to low energetic places where they are built up.
These low energetic places where sediments tend to build up are called sedimentary basins or depositional environment. The process is called deposition.
The sediments are accumulated in parallel layers called strata. The depositional process can occur over thousands or even million years. Upper layers press lower layers, increasing their pressure. This high pressure brings about physical and chemical changes in the sediments of lower zones.
Physical and chemical changes undergone by sediments after their deposition are called diagenesis.
The diagenesis can be divided into three consecutive processes: compaction, cementation and lithification.
The compaction takes place when the weight of upper layers increases the pressure of lower layers, squeezing out the water and compressing the rock fragments. The release of water provokes chemical changes and precipitation of minerals in the pores between the sedimentary grains. The rock fragments bind together. This process is called cementation. All these chemical and physical changes lead to the lithification, that is the transformation of rocks fragments into sedimentary rocks. 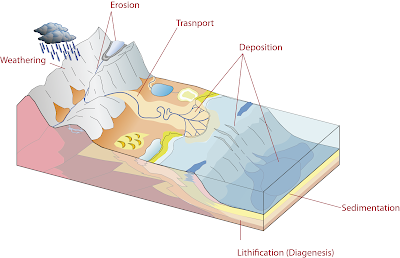 The sedimentary rocks can be classified according to their origin. There are three types of sedimentary rocks: clastic, chemical and biochemical.
Clastic rocks are formed by fragments transported by fluids in movement (water, wind or ice). These are the most typical sedimentary rocks. Conglomerates, sandstones and mudstones are three examples.
Chemical rocks are formed by precipitation of chemical substances dissolved in water. Evaporites, stalactites and stalagmites are three examples.
Biochemical rocks are formed by transformations of different parts of living beings. Limestone, oil and coal are three examples.
Rock Cycle
Rocks are not static structures, they change and evolve. Rocks are transformed into other different rocks. The process is called Rock Cycle. It is a continuous process, but takes place so slowly that human beings can hardly appreciate it.
Any rock can be transformed into an igneous rock if it heats, melts and then cools and solidifies. Any rock can be transformed into a metamorphic rock if its pressure and temperature rise causing chemical and physical changes without melting. Any rock can be transformed into a sedimentary rock if it is eroded, its fragments are deposited and then they suffer diagenesis.