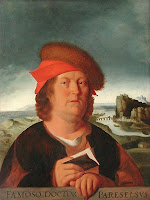 The endocrine system is, along with the nervous system, the main controller of bodily functions. Both systems are coordinated to carry out their functions and they control each other: the nervous system controls the production and secretion of hormones and some hormones can control the nervous system.
Both systems have, however, some relevant differences. The nervous system carries out its functions very quickly, in milliseconds. And it controls punctual or not very lasting actions. The endocrine system, on the other hand, carries out its functions more slowly, in seconds or even minutes. And it controls lasting actions, that can take minutes, such as the vasodilation promoted by some hormones, hours, such as the digestive process or even years, such as growth.
The endocrine system is the main regulator of the homeostasis and metabolism (both anabolism and catabolism). Its functionality is based on the secretion of chemical substances called hormones. They are produced and released by endocrine glands.

Hormones
Introduction
Hormones can be defined as organic molecules responsible for transmitting signals between different parts of the body. Together with the neurotransmitters (that communicate neurones linked by synapses), they are the main chemical messengers.
The hormones are usually transported by the blood. They can carry out their actions at extremely low concentration. Although the blood moves the hormones throughout the whole body, they only act upon some organs or cells. These cells or organs that carry out some specific action when they detect a hormone are called target cells or organs. Only one hormone is perceived, and can only act in cells with specific receptors to detect this hormone.
There are four types of hormones, according to their chemical composition:
Hormonal function
When a hormone reaches the target cell, it should bind with its receptor. Then, two different processes can occur:
Endocrine glands and hormones
Introduction
The endocrinology studies the different endocrine glands. It also analyses the most relevant hormones produced and released by these glands and their main functions.
Hypothalamus – Pituitary Gland
The Hypothalamus - Pituitary - Adrenal axis is the main path that control the endocrine system. Many hormones are directly produced by these glands, or are controlled by hormones produced by this axis.
The hypothalamus is a part of the brain, in the cerebrum, located in its central area. It is directly connected to the pituitary by a neural connection. The hypothalamus is a part of the cerebrum that receives impulses from the brain, so this connection with the pituitary is the main relationship between the nervous and the endocrine systems. The hypothalamus controls the pituitary sending neural impulses or hypothalamic hormones.
The pituitary gland is a tiny organ located under the brain, found in a depression of the sphenoid bone called the Turkish seat. It produces several hormones although many of them do not have direct action on target organs, but on other endocrine glands, promoting or inhibiting the production of other hormones. 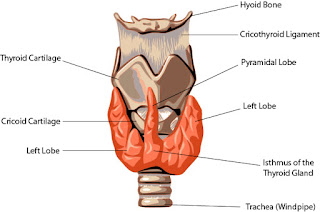 When the gland detects TSH, released by the pituitary gland, it produces and released triiodothyronine (T3) and tetraiodothyronine, also called thyroxine (T4). These are the main thyroid hormones, although this gland also produce Calcitonin (CT).
The thyroid hormones are essential to control the metabolism. They control the cellular metabolism, the basal metabolic rate and the oxygen consumption. They are also involved in the growth and development of the body. They increase the basal metabolic rate or, in other words, the minimal energy required to support the body functions. They also increase the consumption of oxygen. As a result, they cause higher body temperature. They promote the consumption of fats, lipids and glucose. They accelerate the body growth, above all in the nervous system.
The Calcitonin (CT) is, with the Parathormone (PTH) released by the parathyroid gland, the hormone responsible for controlling the calcium and phosphorus levels in the blood. It inhibits the destruction of bone, reducing the levels of calcium in the blood (when the bone is destroyed, the calcium is transported to the blood). And, at the same time, it controls the concentration of PO43- y HPO42- because these ions are usually associated to the calcium (indeed, the bones are made of hydroxyapatite, a salt of calcium and phosphorus). Calcitonin, however, is not the most relevant hormone to control these ions, and the main regulator is the parathormone.
Parathyroid Glands
These are four small glands attached to the surface of the thyroid gland. There are two parathyroid glands in each lobe, one in the upper part and another one in the lower part. 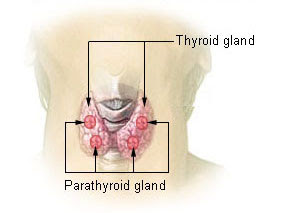 They produce and release the Parathyroid Hormone (PTH), that is the main hormone to control the calcium and phosphorus metabolism. It increases the number and activity of the osteoclasts, promoting the destruction of bone tissue and increasing the levels of calcium and phosphates in the blood. In the kidneys, it promotes the reabsorption of calcium, although, at the same time, it promotes the release of phosphates in the urine. As a result, the hormone increases the levels of calcium, but reduces the levels of phosphates.
The production of PTH is controlled by the levels of calcium in the blood. When this level descends, the PTH is produced and released.
Adrenal Glands
There are two adrenal glands, located above the kidneys. They have two different parts, the external part called adrenal cortex, and the internal part called adrenal medulla. The medulla is smaller than the cortex. 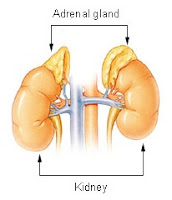 The adrenal cortex has three parts that produce different hormones.
The outer part of the adrenal cortex is called zona glomerulosa and it is responsible for producing mineralocorticoids. The intermediate part is called zona fasciculata and it is responsible for producing glucocorticoids. Finally, the inner part is called zona reticularis and it is responsible for producing gonadocorticoids.
These are the most relevant cortical hormones:
The adrenal medulla is directly innervated by the autonomous nervous system, that controls the production and secretion of hormones. As a result, its secretion is extremely fast.
The main hormones of the adrenal medulla are the noradrenalin and the adrenalin (also called epinephrine). They have the same functions as the sympathetic nervous system and are responsible for getting the body ready for defensive and offensive reactions (called fight-or-flight reactions): fighting, running away, attacking, etc. They increase the arterial pressure, and the heart beat and respiratory rate, they improve the muscular contraction, stimulate the cellular metabolism and raise the glucose levels in blood. They also cause pupil and arterial dilation.
Endocrine Pancreas
This is the part of the pancreas that produce hormones. Indeed, the pancreas has groups of cells that form structures called islets of Langerhans where these hormones are secreted to the blood. These hormones are essential to control the digestion and the metabolism of sugars. The most important pancreatic hormones are:
The pancreas also produces other two hormones: the pancreatic somatostatin (GHIH), that is responsible for stopping the secretion of insulin and glucagon, and the Pancreatic Peptide (PP), that controls the production of digestive enzymes.
Pineal Gland
The pineal gland is located in the roof of the third cerebral ventricle. The most relevant hormone produced by this gland is the Melatonin (Mel). This hormone has a rhythmical secretion, in twenty-four-hours-cycles, also known as circadian cycles. Its secretion is higher during night and lower during day, merely because light inhibits its secretion.

It controls the physiological changes between night and day. For instance, it inhibits the central nervous system to ease sleep. It also inhibits the sexual hormones. Due to this, the secretion of melatonin falls during adolescence in order to allow the body to grow up, ascending after maturation. It also descends during senescence. The hormone protects the body from ageing, so when its levels descends during senescence the effects of the ageing become more important.
Thymus
The thymus produce hormones that promotes the proliferation and maturation of defensive cells, above all lymphocytes.
The best known thymic hormones are the Thymosin, the Thymic Humoral Factor and the Thymopoietin.
Sexual Organs
The sexual organs are different in males and females and their secretions are also different.
The most important secretive part in the female reproductive system is the ovary. When this organ is stimulated by the gonadotropins (released by the pituitary gland) it produces and secretes two different kind of hormones:
As far as the male sexual reproductive system is concerned, the main secretive organs are the testicles. The male hormones are called androgens and the most relevant one is the testosterone.  It promotes the production and maturity of spermatozoa, the development of the male sexual organs and the secondary sexual characteristics in males, such as the body hair or the muscular growth.
Other organs that produce hormones


Many organs and tissues can produce hormones in some circumstances. The kidney, for instance, produce and release Erythropoietin when it detects low amount of erythrocytes in blood. The heart produce a vasodilator called Atrial Natriuretic Peptide when the atrial cells detect over-expansion. 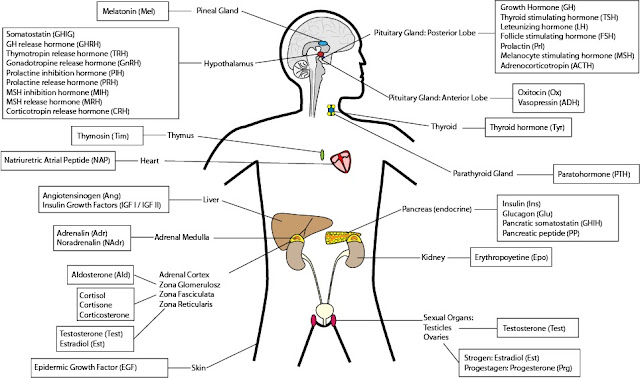 Need To Increase Your ClickBank Traffic And Commissions?