The sensory system is responsible for perceiving stimuli from the environment by the sense organs, sending this information to the central nervous system in order to be interpreted.
The sensory system is made up of five sense with their respective sense organs: sight, hearing, smell, taste and touch.
Sight
Characteristics
This is the sense responsible for perceiving electromagnetic radiation from the environment or, in other words, light. Its sense organ is the eye. We are able to perceive electromagnetic radiation with wave-lengths from 400 nm to 700 nm, known as the visible light spectrum (lower radiation, such as ultraviolet rays, or higher radiations such as infrared rays are not visible).
Sight is, in human beings, the predominant sense.
Eye Anatomy
Eyes are the main organs of sight. Their receptor structure is made up of a layer of cells that perceive light, surrounded and protected by a group of accessory structures.
There are internal and external accessory structures. One of the external structures are the eyelids. These are skin folds that cover the external part of the eye and close when in order to prevent the eye from being damaged by light when it is very intense. Eyelids also protect eyes from being damaged by blows. Finally, they extend lubricating fluids over the eye surface.
There are a group of long and thick hairs on the eyelids edge called eyelashes. They protect the eye from little particles, that are captured by the hairs.
The eyebrows are a group of hairs that form a sort of arc above the eye. Their function is preventing sweat and water that run down from the upper part of the head from falling into the eye.
There are group of glands associated located in the edge of the eyelids, called Meibomian glands (also known as tarsal glands). They lubricate the eye surface and protect them from infections.
Finally, the Lacrimal Glands are located in the upper lateral part of the orbit, and they are responsible for humidifying the eye surface. They produce tears that cover the eye surface and flow to the canals situated in the internal corner of the eye, that are connected to the lacrimal sac to drain the liquid.
The sensitive part of the eye is enclosed in a structure called ocular globe. Its diameter is between two and three centimetres long. And its surface can be divided into three consecutive layers, called fibrous, vascular and nervous tunics. 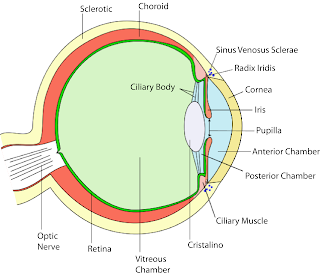 The crystalline, located behind the iris, is a transparent structure working as biconvex lens. The ciliary muscle can change the crystalline curvature, so that the light rays converge on the retina. On the one hand, when an object is very close to the eye, the crystalline must be as curved as possible to focus it on the retina. On the other hand, when an object is far away from the eye, the crystalline must not be curved to focus on the object. As a result, focusing closer objects causes fatigue, because the ciliary muscle must be contracted. Watching distant objects, however, is not so hard because the ciliary muscle must be  relaxed.
The ocular globe has three chambers. The first one, called anterior chamber, is located between the cornea and the iris. The second one, called posterior chamber, is smaller and it is located between the iris and the crystalline. These two chambers are filled with a fluid called aqueous humour. The third one is bigger, is called vitreous chamber and is filled with a liquid called vitreous humour.
The eyes moves due to the action of six ocular muscles. There are four rectus muscles and two oblique muscles. There are also other muscles responsible for the contraction of the iris (they change the diameter of the pupil). 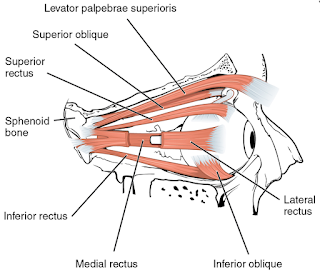 Eye physiology
The light from the exterior crosses the cornea, reaches the iris, which is responsible for controlling the amount of light that passes to the crystalline and is concentred on the retina.
The retina has two types of photoreceptors called cones and rods. Cones are responsible for perceiving different colours, whereas rods are responsible for black and white vision. Rods need a significant amount of light to work.
When the photoreceptors perceive a stimuli they send a signal to the optic nerve. It transmits the information to the brain, that is responsible for analysing the stimuli, transforming then into images.

Taste
Anatomy of taste sense
Taste is a chemical sense or, in other words, the receptors are stimulated by chemical substances dissolved in the mouth. Although the chemoreceptors of the taste sense are mainly on the thong, a part of the taste sense derives from the olfactory receptors of the nose, due to the aromas that ascend through the nasopharynx.
The taste chemoreceptors are in a group of structures on the mouth called taste-buds. An adult human has, on average, 10,000 taste-buds, although the number of buds tends to descend over the years. The taste-buds have receptor cells with microvilli that perceive chemical stimuli.
The taste buds are placed in prominent structures of the tongue called lingual papillae. These papillae make the tongue surface slightly rough. There are several types: 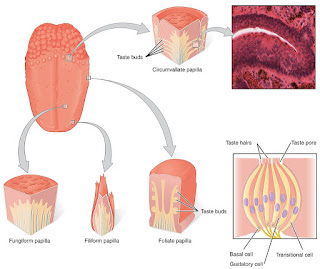 Taste Physiology
When a chemical substance is detected by the papillae, after being dissolved in saliva, the chemical receptor sends a signal to its associated neutron. This signal is transmitted to the central nervous system.
There are only five basic or primary tastes: bitter, sweet, sour, salt and umami, also known as savoury. The taste of a food is a mixture of these five basic tastes. The anterior part of the tongue (the tip of the tongue) is more sensitive for sweet and salty sensations. The posterior part of the tongue is more sensitive for bitter sensations. The lateral parts of the tongue are more sensitive for sour sensations.
After perceiving a stimuli, the taste sense tends to adapt to it, reducing the intensity of the sensation. It is called palate fatigue. Bitter substances are not so prone to cause adaptation, probably because many poisonous substances are bitter. 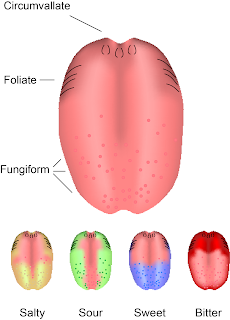 Olfactory System
Anatomy and physiology of the olfactory system
This is, like taste, a chemical sense, based on chemoreceptors. It is not a specially well developed sense in human beings (above all, if we compare it to the olfactory system of other mammalians).
There are between 10 and 100 million chemoreceptors, located in the upper region of the nasal cavity called nasal epithelium. It is 5cm2, and it has receptor cells disseminated between ordinary epithelial cells that support the tissue and Bowman's glands that produce mucus to humidify the nasal cavity surface and dissolve the internal gases. When the gases are dissolved by the chemical substances can reach the receptors.
Human beings can detect many different smells. It has been impossible to reduce them  to any group of primary or basic smells and there could probably be hundreds.
When a chemical substance reaches the proper receptor, it sends an impulse to the central nervous system by an associated neurone. The axons of these neurones cross the ethmoid bone, that forms the roof of the nasal cavity. The part of the ethmoid bone that is crossed by the neurones is called cribriform plate. Just above this plate, there is a part of the brain called olfactory bulb. The information is transmitted from the receptors to the olfactory bulb, and then to the frontal lobe of the brain, where it is analysed.
The olfactory system easily adapts to the odors after prolonged exposure, in a similar way to what happens with taste. This process is called olfactory fatigue.

Hearing
Ear Anatomy
The ear is responsible for perceiving sound waves, or in other words, vibrations of the air particles. The sound waves reach the auricles, on both sides of the head, and are transmitted to the interior.
The ear transforms this mechanic wave into a nervous impulse. In addition, the internal ear has the structures to control balance.
The ear has three parts called outer, middle and inner ear. 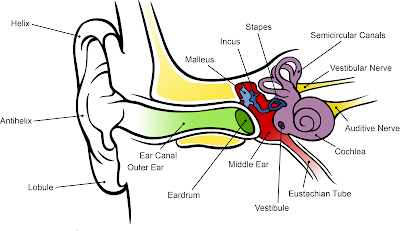 Ear Physiology
The sound waves reach the auricle and are transmitted through the ear canal to the eardrum the eardrum vibrates due to the energy of the sound waves, and this vibration is transmitted from the eardrum to the malleus, that moves the incus and then the incus moves the stapes. The movement of the stapes is transmitted to the internal membranes of the inner ear, causing the movement of the endolymph through the complex internal canals of the labyrinth. It is perceived by sensorial cells that cover the interior of the labyrinth and send the information to the Corti's organ. The Corti's organ transmits the signal to the central nervous system through the auditory nerve.
The auditory centre is located in the temporal zone of the brain.
The ordinary movements of the body cause a movement of the endolymph in the semicircular canals. The canals are perpendicular one another. As a result, the movements of the head are transmitted to the endolymph of the semicircular canals and they move in different way depending on its position and angle. The canals send information to the brain. According to the movement of the fluid in each canal, the brain detect the global movement of the body and the global balance.
Touch
Touch anatomy and physiology
It perceives stimuli from the exterior. Some mechanical stimuli, such as pressure, contact, vibration or temperature are detected by receptors located in the skin. These sensations can have different intensity or can even activate nociceptors that are specific to pain.
The touch receptor can mainly be found in the dermis. There are two types: free nerve endings or corpuscles and receptor corpuscles. There are many different corpuscles, such as Paccini, Ruffini or Meisser receptors. There are also receptors associated to hair follicles.
The receptors are connected to afferent neurones that send the information to the afferent nerves that transmit the impulse to the central nervous system, first to the spinal cord and then to the brain. The sensitive area is located in the brain cortex. This are is responsible for mapping the information to locate and interpret the stimuli.


The stimuli for pain are not transported to the sensitive cortex, but to the thalamus. In this brain region the mapping of the sensation is not so precise, so the pain sensations are more diffuse. 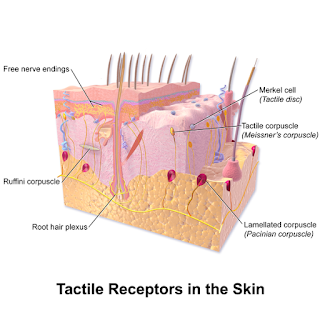