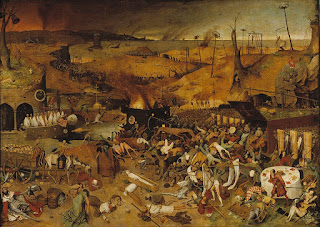 The most simple definition for health is the absence of illness. In other words, we can say that we are healthy when we are not ill. But, when are we ill? When are we healthy? What is exactly a disease?
The World Health Organization defines health as the state of complete physical, mental and social well-being and not merely the absence of disease or infirmity.

In this definition, health is divided into three basic parts: physical, mental and social. Physical health, also called allostasis, is the maintenance of physiological homeostasis through changing circumstances. Mental health is related to the sense of coherence. And finally social health is the ability to manage life and to participate in social activities.

On the other hand, we define illness as an abnormal or pathological condition that affects part or all of one organism. Diseases are disorders in system, organs, tissues or any other structure of the body.

Communicable diseases are also called infections. They are related to the invasion of our body by infective agents, such as viruses and bacteria.

Non-communicable diseases, however, are not related to infections. They are defined as diseases or medical conditions which are non infectious and non transmissible among people.

As we studied, communicable diseases are related to the invasion by infectious agents. These agents are also called pathogens, and can be defined as living beings with the ability to cause disorders in their hosts.

Viruses are extremely tiny and simple organisms, so small that they only can be seen using an electron microscope.

Viruses are made up of three main components: a nucleic acid, proteins and and in some viruses an envelope of lipids.

Viruses have two kinds of proteins: structural proteins and enzymes. The structural proteins make up the capsid of the virus. The capsid is the protective coat of the organism where the nucleic acid is enclosed. The enzymes are proteins that carry out the chemical activities of the virus. These activities are, mainly, duplication of DNA and production of the proteins of the new viruses.

There are many examples of diseases caused by viruses. The most important ones: flu, AIDS, rabies, poliomyelitis, rhinitis, ebola, hepatitis, herpes or measles. 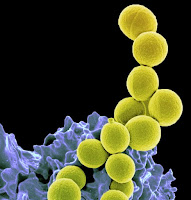 Bacteria are simple living beings that belong to the kingdom Monera. They are prokaryotic cells, so they are always unicellular organisms. They are simple cells with neither nucleus nor internal complex organelles.

This simple cells are covered by a proteinic cell wall. They reproduce by partition. And most of them are not pathogen. In fact, many of them are useful; they are related to the production of some food, such as yogurt for instance. Besides many bacteria live in our body but do not cause diseases. Some of them are essential in our body, releasing proteins during our digestion or preventing our body to be invaded by other bacteria.

Pathogenic bacteria can produce toxins and attack our cells. Some bacteria that are not dangerous in one part of the body, can cause grave diseases in another. There are bacteria, for example, that live in our skin and do not cause any kind of disease, but can be extremely dangerous if they reach internal organs traveling through the blood.

There are many examples of diseases caused by bacteria. The most important ones are typhus, salmonellosis, cholera, poliomyelitis, gastroenteritis, plague, syphilis, tetanus, pneumonia or anthrax.
Protozoa. 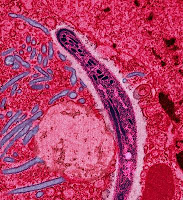 Protozoa are complex cells that belong to the kingdom Protoctist. So they are eukaryotic unicellular organisms. They are cells with nucleus and internal organelles, covered by a plasmatic membrane but not by cell wall.

Pathogenic protozoa can produce toxins and attack our cells. There are not many diseases related to protozoa, although one of them, called Malaria, is a extremely grave disease that causes thousands of deaths year after year, mainly in tropical regions of Africa.

Toxoplasmosis, trypanosomiasis or leishmaniasis are other relevant diseases caused by protozoa.

Fungi belong to the Kingdom Fungi. They are unicellular or multicellular organisms, made up of one or more eukaryotic cells. So that these cells have nucleus and internal complex organisms. They are covered by a plasmatic membrane, but not by cell wall. 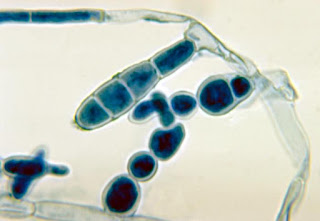 Multicellular fungi form structures called hyphae and they usually divide by simple partition, although they also have sexual reproduction.

Most of them are not pathogen and there are many fungi that are commonly used in industrial processes, such as production of cheese or fermentation of fruit to obtain alcoholic drinks: cider, wine, beer, whiskey, etc.

The most frequent diseases produced by fungi are superficial affecting our skin. Internal infections by fungus are not usual. Tinea pedis (better known as ringworm), candidiasis or pityriasis are examples of diseases caused by fungus.

Prions are not living beings, they are simple proteins, similar to toxins, that some animal tissues can build up. They can enter in our body across the digestive or respiratory system, reaching our cells and provoking formation of irregular proteins.

There are few diseases known, but one of them has been sadly famous throughout the last years. It affects cows and sheep, it is called bovine spongiform encephalopathy, or mad cow disease. When it is transmitted to humans (due to the consumption of infected food), the prion causes a disease called Creutzfeldt-Jakob disease.

When a disease spreads affecting many people, we can talk about epidemics and pandemics.

Epidemic is defined as a widespread disease that affects many individuals in a population at the same time period.

Pandemic is defined as an epidemic disease that spread through human population across a large region, frequently multiple countries or even continents. 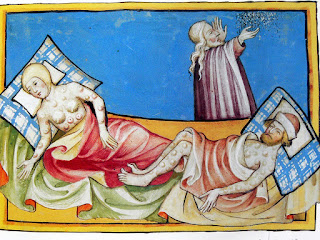 These invaders are visible with the naked eye or using magnifying glasses. Many of them can not only cause direct diseases, but also transmit other diseases. Then, the parasite is called vector.
So vector is defined as any agent that carries and transmits an infections pathogen into another living being. Probably the most famous vector is the mosquito that transmits malaria.

Most of the macroscopic parasites feed from the host organism. Lice, for instance, live in our hair and feed from our blood. Parasites are usually very specialised, so that a parasite can live only in one or a few species of host.

Macroscopic parasites can be classified according to the animal group they belong to. Human beings can be infested by nematodes, such us roundworms that invade our intestine. Or Platyhelminthes, such as taenia, also called genus, a flat worm that invades our intestine.

The most abundant macroscopic parasites are, by far, arthropods. There are many insects that parasite human beings, such as fleas, mosquitos or lice. But there are also arachnids, such us ticks and scabies. 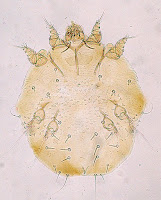 Congenital diseases are diseases that exists at birth. Spina bifida, for instance, that is characterised by the incomplete closing of the backbone during the embryonic development (it is related to deficiency of folic acid during pregnancy).

Hereditary diseases are transmitted from parents to descendants. Cystic fibrosis, for instance, is a severe disorder that affects the lungs (and also other organs, such as liver or pancreas).

Deficits are diseases related to low amounts or lacking in any important substance. Vitamin C lacking or deficiency, for instance, results on a disease called scurvy.

Genetic diseases are related to dysfunction in genetic information. Down syndrome, for example, is a disorder caused by the presence of an extra copy of the chromosome 21. 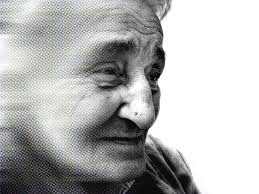 Functional diseases are diseases in tissues, organs or systems for different reasons. Diabetes, for instance, is a disease related to pancreatic disfunction.

Healthy habits are, by far, the most important way to prevent diseases. There are many habits that help us to preserve our body from ordinary diseases. 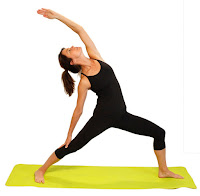 A balanced or healthy diet is important to prevent obesity or anorexia. It helps us, besides, to ensure the consumption of nutrients in optimum amounts. 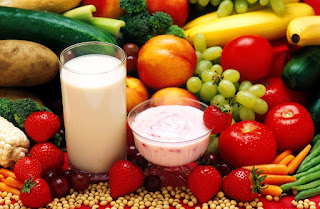 Having a healthy lifestyle is also very important. Consuming drugs or other toxic substances, such us alcohol, clearly increases the probability of suffering from severe diseases, affecting diverse vital organs and reducing our life expectancy.

Our lifestyle is also related to the prevention of accidents. Driving carefully and respecting safety rules when we work with dangerous devices or machines help us avoid unexpected and serious accidents.

Vaccination is defined as the administration of substances to stimulate the adaptive immune system. 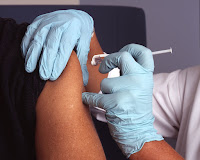 The inoculated substance could be made up of parts of microorganisms (viruses and bacteria) or attenuated pathogens (in other words, pathogens unable to provoke diseases). When the immune system finds these substances it produces antibodies. Antibodies are complex proteins that destroy the invasive agents. Therefore, if a real infectious agent  invades our body, our immune system has already produced antibodies, so the response will be faster and more effective.

Summing up, vaccines are very important because they teach our immune system how to fight against dangerous microorganisms.

Vaccination has been transcendental in defeating some serious diseases, such as smallpox or poliomyelitis. In developed countries there is an official vaccination timetable, so that some severe infections, such us rabies, have nearly disappeared in these regions.

Vaccination is extremely useful to prevent infection, but it is not the best system when the infection has already taken hold.

When we are sick we use medicines to recover our lost health. There are two main groups of medicines: antibiotics and other generic medicines.

Antibiotics are substances that kill or inhibit the growth of microorganisms. So that they must be used to fight infectious diseases. 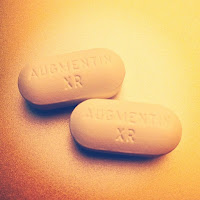 Most antibiotics are specific to a few different organisms. Due to this, knowing the microorganism responsible for the infection is quite important to select the best antibiotic to  fight against it.

Viruses do not have their own metabolism, they use our cells to reproduce. Due to this, antibiotics are not effective when we want to fight viruses.

There are other types of medicines, useful when the illnesses are not related to infections or when we want to mitigate the undesirable effects of any affection. 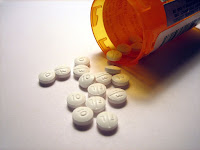 Analgesics, also called painkillers, are medicines used to relieve pain. They are used, for instance, when somebody has a headache or a toothache. Antipyretics are substances that reduce high temperatures. High temperatures are frequently associated with infections.  Anti-inflammatories reduce inflammation. Inflammation is a response by our body to infections or other injuries. Bronchodilators dilate bronchi. Antihistaminic are used to fight allergic reactions. There are many others medicines, such as laxatives that increase the intestinal movements when you are constipated, vasoconstrictors and vasodilators to control the blood pressure, stimulators, anti-stress, mood stabilizers and tranquilizers to regulate neural activity, antitussives to reduce the intensity of coughs, etc.
Publicado por elmodernoprometeo en 4:47 No hay comentarios: