Parasitism can be defined as a relationship that takes place between two living beings of different species, where one of them feeds on the another without killing it, but causing damage. In other words, one of the species obtains benefits, whereas the other one suffers.

Human beings have many different parasites. Some of them are nematodes, such as intestinal roundworms, others are Platyhelminthes, such as tapeworms, although the most of them belong to the phylum Arthropoda, something logical because three quarters of the whole animals are arthropods.

Some parasite arthropods live outside our body and only contact with us in order to get their substance. Mosquitos or ticks are two examples. Others, however, live on our body, so that they can easily access their food. The main examples of these kinds of bugs are fleas and lice. Curiously, all of them feed on the same organic product: our blood.

The parasites that live on their hosts are usually extremely adapted to them. In general, they have only one or few favourite preys. The fleas that live on dogs are different to the fleas that live on human beings. Dog fleas can live on our skin, but not for long. In fact, they will move to their original prey as soon as possible. During the fifteenth century rat fleas transmitted an extremely severe disease, called black death, because they attacked people when their host (the rat) died due to the pest and they needed a temporally living being to survive. Sadly, at that moment rats were very abundant in cities, because of the lacking of basic hygienic conditions. 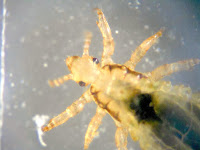 Lice (Pediculus humanus) are, doubtless, the most frequent parasite capable of living on our skin. They rarely transmit diseases. Nevertheless, they are a recurrent and uncomfortable infestation, above all in children. As we said, human lice are exclusive for us, and different to lice of other mammals. What is more, there are even slightly different lice adapted to dwell on different races. And there are three different types of lice according to the zone of our body they prefer to invade. 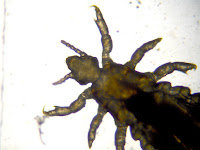 The first type is the louse that is adapted to live on our head (Pediculus humanus sp capitis), attached to our hair. It is, by far, the most frequent one. This louse always lives there, and the females lay eggs that mature attached to the base of the hair. These eggs are called nits. The mature animal feeds on our blood, biting our skin and causing the typical stinging.

The second one is the bodily louse (Pediculus humanus sp corporis). This animal is adapted to feed on the skin that is not completely covered by hair. It can not live on our skin, because the hairs are too thin and not abundant enough, so that it usually lives in our clothes, mainly in the folds of shirts, jackets or sweaters. It leaves the clothes and moves to our skin just to obtain blood, coming back to the clothes after feeding. These lice are not so frequent, and sometimes they can penetrate in our epidemic tissue to protect themselves.

The last type of louse is called crab louse (or simply crab) (Pthirius pubis). This louse is adapted to live, feed and reproduce on our genital zone, attached to pubic hair. It can not live on our head, merely because the section of the hair is very different (the hairs on our head have a circular or slightly ellipsoidal section, whereas pubic hairs has a triangular section). If the population of crab lice rises too much, some of them can migrate to other places with similar hairs, above all our armpits and our eyebrows.