The Manna for the Acari.

Biologists define commensalism as an inter-specific relationship, that takes place between two different species where one of them obtains some profit without affecting the other one.

One typical example of commensalism is the relationship between human beings and those myriads of acari, also called dust mite, that live in our pillows, sheets or mattresses. Some of these small arthropoda are adapted to live close to humans and feed on our dead epithelial cells that are permanently being removed from our skin. The animal obtains its food without affecting us, unless we are allergic to them. But, even in that case, we must talk about commensalism because the dust mites are not responsible for the damage, it is our defensive system which is working incorrectly. Summing up, the bug causes indirect damage and after all, it is not to blame.

Dust mites are one of the smallest known animals, they measure around 250 microns so they are hardly visible to the naked eye. They belong to the phylum arthropoda, and the class arachnida, like spiders or scorpions and just like them, they have eight legs and their body has two main parts, the cephalothorax and the abdomen. As they feed on dead organic matter, we can say that they are scavengers.

Evolution has transformed some of these animals into our ordinary neighbours. They dwell in places where dust and organic matter are especially abundant. And we lose lots of dead epithelial cells when we are sleeping in our beds. Due to this, they are glad to combine our rest and their meal.

The fact of being surrounded by animals capable to live eating dead parts of our body is, in my opinion, slightly overwhelming. Superficial cells of our skin are shed constantly. Indeed, a fraction of the dust that it is built up in our house is made up of these cells we have released. This is the reason why we talk about dust allergy; we should talk about allergy to dust mites, because the animals that live in the dust are the real allergen.

Our skin is a complex organ with three parallel layers. The lower one, in contact with other inner tissues, above all bones and muscles, is called hypodermis. This is a connective tissue, rich in adipocytes (also called fat cells) and fibrillar proteins. Just above this layer we can find the dermis, a thick layer made also of connective tissue, although this one is richer in water, elastic fibers and fibroblasts, the cells that produce and support the fibrilar system.

The cells move through the epidermis towards the surface and at the same time, they carry out a maturative process, they build up a fibrilar protein called keratin that make them harder. They also lose all their inner organelles and, step by step, they are transformed into a block of keratin. After finishing the process, after arriving in the surface, they are dead. To sum up, all our exterior is a sort of sheet, a tissue of keratin and dead cells (called squamous cells). The older cells are removed and other cells take their place. This is the way our body keeps our exterior in optimum condition.

From the dust mites point of view, these lost cells are a sort of manna released by those enormous animals that God created in order to provide them their food.
Publicado por elmodernoprometeo en 9:18 No hay comentarios: 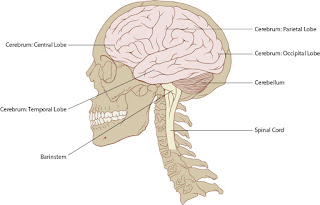 
Or maybe the brain decides that the response must be executed by the autonomous nervous system, that will send the information to inner organs and glands. For instance, if the stimulus is related to an increase of our body temperature, the autonomous nervous system will order the sweat gland to release sweat to the skin.
Publicado por elmodernoprometeo en 8:12 No hay comentarios: